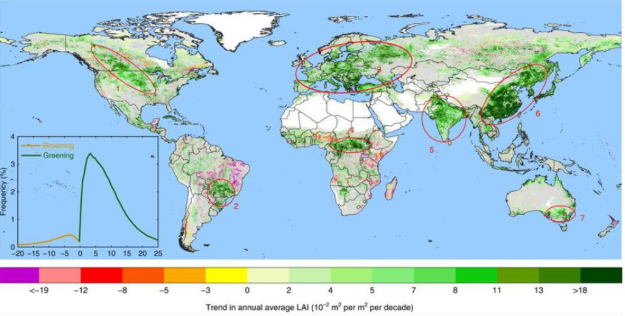 Despite alarming rates of deforestation in Brazil and Indonesia, researchers from NASA have recently been able to confirm that the Earth is “literally a greener place than it was 20 years ago.” (NASA) As it turns out, this is not due to some natural cause, like an increased amount of CO2 in the atmosphere and a warmer/wetter planet. Rather, it is a result of human activity:

Research scientists at NASA’s Ames Research Center in Silicon Valley, CA state that, “When the greening of the Earth was first observed, we thought it was due to a warmer, wetter climate and fertilization from the added carbon dioxide in the atmosphere, leading to more leaf growth in northern forests, for instance. Now, with the MODIS (Moderate Resolution Imaging Spectroradiometer) data that lets us understand the phenomenon at really small scales, we see that humans are also contributing.” (NASA) Initially noticed in the mid- 1990’s by Ranga Myneni of Boston University, it was unclear if human activity was a direct cause of the greening. However with MODIS, extremely accurate information can be displayed pertaining to, “details of what’s happening with Earth’s vegetation, down to the level of 500 meters, or about 16000 feet on the ground. MODIS has captured as many as four shots of every place on Earth every day for the last 20 years.” (NASA) 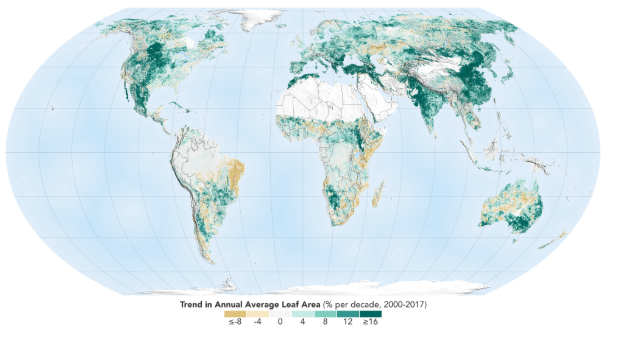 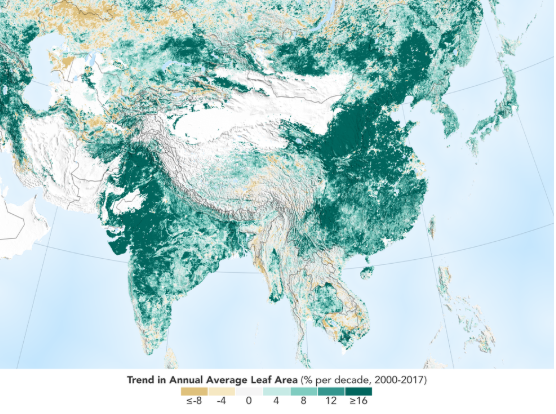 Areas with the greatest increase in foliage are indicated in dark green.

As seen in the map, most of the greening is occurring in China and India, countries which have both set forth ambitious programs to conserve and expand forests with the goal of mitigating land degradation, air pollution, and climate change. This is contrary to the widely held belief that populous countries tend to overexploit land as a means for economic growth. However, this perceived economic phase of the two countries have come and gone. Both China and India, “went through phases of large scale deforestation in the 1970’s and 80’s, clearing old growth forests for urban development, farming and agriculture.” (Forbes) Global priorities saw a shift in the 1990’s when climate change became a more prominent issue, and both countries began to make tremendous shifts towards improving their land use. 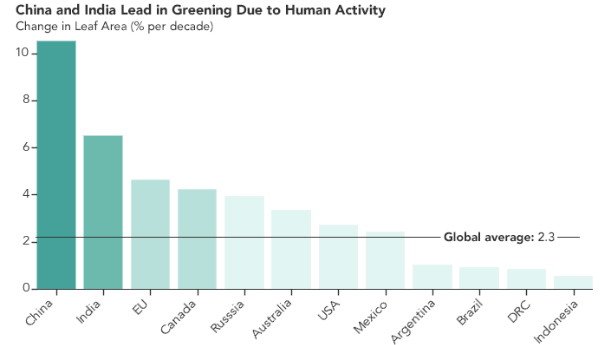 China accounts for a majority of the increases in global leaf area, accounting for 25% of global net increase, with only 6.6% of global vegetated area. The greening in China is from forests (42%) and croplands (32%). In India, the increase is mostly from croplands (82%) with only minor contributions from forests (4.4%). Croplands are a key driver in the ‘Greening Earth’; since 2000, the production of grains, vegetables, and fruits have increased by about 35 – 40% in each country. This is a result of the need to feed a growing population, as already both of these countries have the highest and second highest populations in the world.

Researchers who conducted this study do not emphasize that this is a fix to deforestation problems, but rather that, “the gain in greenness seen around the world and dominated by India and China does not offset the damage from loss of natural vegetation in tropical regions, such as Brazil and Indonesia. The consequences for sustainability and biodiversity in those ecosystems remain.” (NASA)