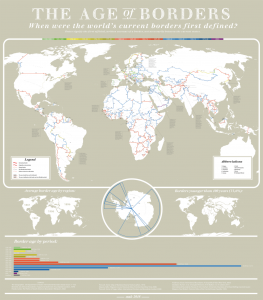 International borders are widely accepted as immovable and ancient boundaries. Even within a twenty-first century atmosphere of innovations, progress, and change, the placements of land borders are revered as long standing and permanent. After all, the border crisis, fleeing refugees and military actions all serve to reinforce the immutability of country boundaries.

The map above reveals the timeline of border formations globally. Shockingly, more than half of the 159,452 miles of international borders were not defined until the twentieth century. Furthermore less than 1% of current borders were created before the year 1500. In the timeline of human history, the drawing of international borders is a relatively new process, and certainly not a simple one. Some borders can be determined clearly in instances where two areas are separated by geographical features such as rivers, mountains, or oceans. The reality of most international land borders is that they are geographically arbitrary. It takes two to tango and two to demarcate an international border. As one can imagine, setting an agreed upon line between two nations can be a painstaking process. Different cultures use different systems for defining a ruler’s area of influence, with larger nations often trying to annex smaller ones, with communities at risk of being separated. This mapmaker also broke this topic up by region, the map below shows the relative eras when borders were established in different continents. 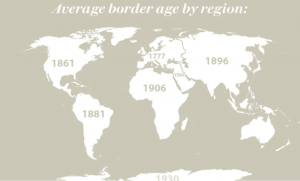 The oldest border is depicted on the map to the left. This boundary is also one of the few with a specific demarcation date. On September 8th, 1278, the Tractat de pareatge charter was signed to establish the mountain territory of Andorra under the domain of the feudal counties of Foix and Urgell. You will find some of the oldest borders on this map in Europe where recorded territorial disputes and feudalism originated very early on. 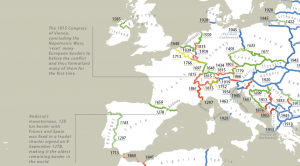 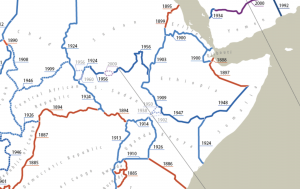 On the other hand, some of the youngest established borders in the world are less than 12 years old. In the map to the right, you can see the most recently established border which distinguishes the region of Abyei from Sudan and South Sudan. There were disputes between both countries over the oil rich region of Abyei which has complicated the decision on where the border between Sudan and South Sudan should lie. Reflective of the painstaking demarcation process, the dotted line on this map shows the status of this border is still in dispute 12 years later.

As geographers we are trained to always account for the subjectivity inherent to mapmaking. While national borders are a basic building block of geography and a trusted tool for students to learn about where countries are located, this map puts some of these assumptions to the test. International demarcations are a relatively new system that has only existed since the formation of nation states. Remember, until the latter half of the twentieth century, most of the world was still wide open territory with loosely or undefined boundaries.

I appreciate the questions that this map proposes to geographers: Who creates the lines that we use and trust in our maps? Are there any current border disputes that are actively challenging the established boundaries between countries? The dashed lines on this map represent that many boundaries can not be simplified to a single line on a map. Is there a way to accurately map national boundaries that can quell ongoing disputes and respect the beliefs and values of each country?

To engage with a full resolution zoomable map visit here.