The New York Times created an interactive visualization and map of the world’s most polluted airs by tiny particulate matter. Users may choose their city to visualize, while comparing and contrasting to majorly polluted areas worldwide.

For the graphics below, I chose to use the city I am currently living in, Washington, D.C., to see the differences between my area’s air quality in comparison to the air pollution facing millions of people in the Bay Area and New Delhi. The floating particles in the background represent microscopic particulate pollution known as PM2.5. 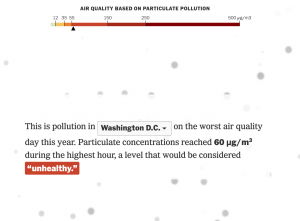 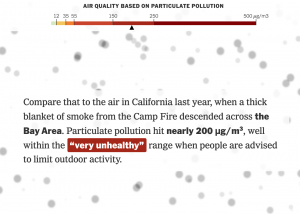 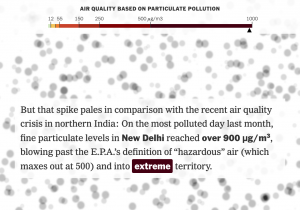 In 2015, about 4.2 million people died from outdoor particulate pollution, with millions more falling ill from poor air quality, which at most times are filled with particulates from when substances are burned—namely coal, gas, chemicals from large industrial processors, and wildfires. 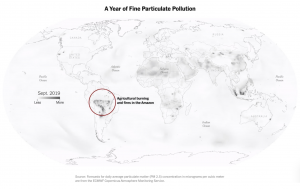 The world map above emphasizes major events that lead to increased pollution in different areas of the world from November 2018 through November 2019. For example, in August through September 2019, particulate pollution spiked in Brazil as the Amazon burned for agricultural production.

While this provides average city-wide pollution data, it’s important to remember that polluted air varies within cities and even within block groups. In the United States, a study found that minority populations are more likely exposed to dirtier air, despite contributing less to overall pollution. A similar trend occurs globally, where the poorest suffer the most from unhealthy air. In order to combat the effects of pollution, we must all think about the ways in which we contribute to global air pollution and make the effort to minimize such outcomes.

Check out how your city fares in comparison to the world’s most polluted areas and learn more about what governments are doing (or not doing) to address these issues. https://www.nytimes.com/interactive/2019/12/02/climate/air-pollution-compare-ar-ul.html