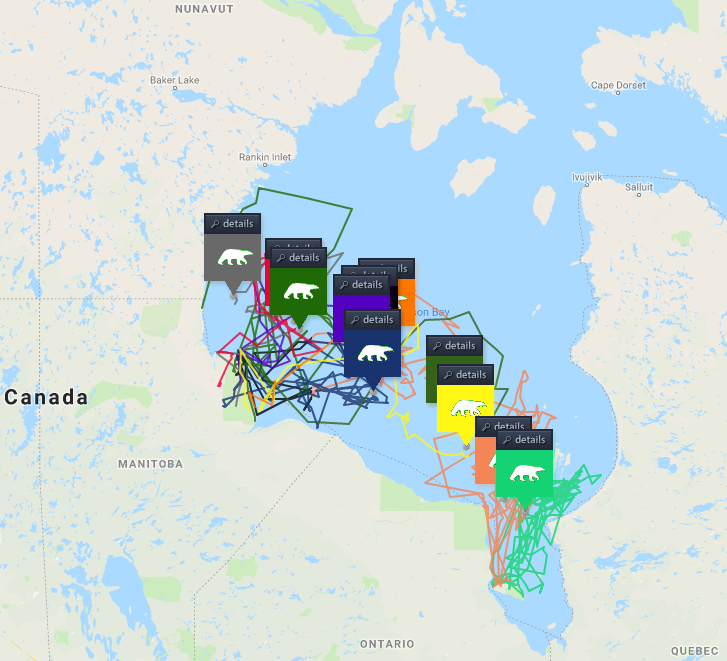 Polar Bears are currently listed as a vulnerable species according to the International Union for the Conservation of Nature (IUCN).

International Polar Bear Day is observed each year on February 27th as a day to learn more about the animals and increase awareness for conservation efforts tailored to the species. Currently, polar bears are a vulnerable species, as listed by the International Union for the Conservation of Nature (IUCN), meaning that their overall population is in decline. For example,  in Canada’s Western Hudson Bay, populations of polar bears have declined 30% between 1987 to 2011. The company Polar Bears International (PBI) states that the cause of this is, “directly related to longer ice-free seasons on Hudson Bay during this same time frame.”

This map was created by Polar Bears International; a company made up of a small group of conservationists, scientists, and volunteers, whose goal is to “secure a future for polar bears across the Arctic,” (PBI) to show polar bear movements across the Hudson Bay in Canada. This bay has very low year-round temperatures, as water temperature usually peaks at around 46 – 48 degrees fahrenheit. The bay is largely frozen over from mid- December to mid- June, giving polar bears substantial ground to hunt for food such as seals. This map is an interactive map that shows in real time where polar bears are moving. Tracking these bears helps to gather information about where polar bears hunt, and how climate change is affecting these habits.

Polar bears have long been struggling to maintain their numbers as a result of human activity. In the past, hunting was a major threat to the survival of these animals. However, after noticing population declines in the 1960’s and 70’s, all of the five “polar-bear nations” (nations that hold polar bear habitat within their borders) signed onto a landmark accord titled the Agreement on the Conservation of Polar Bears, to regulate practices and conserve polar bears in the world. These nations include Norway, the United States, Russia, Canada, and Greenland. This agreement was pivotal in preventing polar bears from going extinct, and it remains as “one of the strongest multilateral environmental agreements ever signed.” (PBI)

Since this agreement was signed, the threat of hunting to polar bear population numbers has shrunk substantially, but there is a new threat that is hurting polar bears:sea ice melt as a result of climate change. According to PBI, “today, the primary conservation concern for polar bears is loss of their sea-ice habitat and reduced access to their seal prey, a problem caused by climate change.” (PBI) Other challenges include increased commercial activities, pollution, disease, inadequate habitat protection (of denning and seasonal resting areas), and the potential for over-harvest in smaller or declining subpopulations. It is for these reasons why tracking polar bears is so vital to understanding where they are vulnerable and how conservation efforts can be focused to curbing these risks.

“The most recent International Union for Conservation of Nature (IUCN) report estimates there are roughly 26,000 polar bears.” About 60% of the world’s polar bears live within or are shared by Canada/ Polar bears are also found in the U.S. (Alaska), Russia, Greenland, and Norway (Svalbard). Scientists emphasize that we can help restore sea ice habitat by greatly reducing carbon emissions.” (PBI)