Americans tend to identify strongly with the culture of the region they are from. But do all Americans have the same definitions of what geographically defines these regions? Of the geographic regions in the United States, the Midwest tends to have the most indistinct boundaries. The maps below depict different ideas of what states make up the Midwest. While different methodologies were used to create each map, similar spatial patterns are represented.

The most recent analysis comes from the Washington Post in late July 2022. Thousands of Airbnb listings were used to map the frequency of including the word “Midwest.” Twelve states have listings that mention “Midwest,” with Iowa having the most listings, followed by Indiana and Wisconsin. The analysis also included the percentage of Airbnb listings using specific keywords specific to 12 Midwestern states, with “Walleye,” “Heartland,” “Conservatory,” and “Lutheran” topping the list. 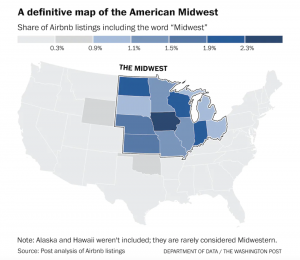 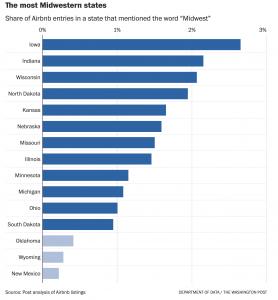 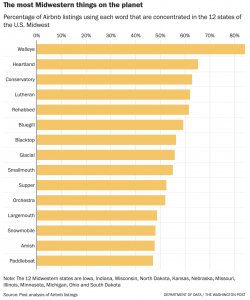 A CityLab analysis from 2019 was created by a two-question survey asking people to input their zip code and state whether they believe their location is part of the Midwest. The definition of “Midwest” was left open. More than 12,000 responses were collected, and the results are seen in the map below. Most people believe that cities such as Chicago, Milwaukee, Omaha, Minneapolis, Detroit, Indianapolis, Columbus, Cleveland, St. Louis and Kansas City are Midwestern, but uncertainty arises in cities such as Pittsburgh, Buffalo, Oklahoma City, Louisville, and Rapid City. 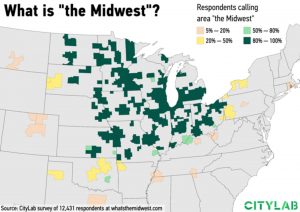 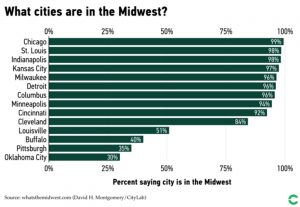 Iowa was ranked as the most Midwestern state in a 2016 Vox survey of more than 34,000 people. Illinois, Wisconsin, Indiana, Minnesota, and Missouri closely followed. Being in the middle area of the United States does not always classify a state as Midwestern. Oklahoma only received 18 percent of votes, which is directly below Kansas that received substantially more votes. 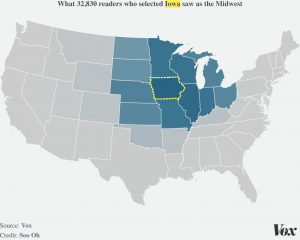 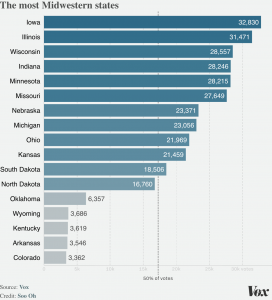 These maps show how likely voters were to pick a state, based on other states they selected. Regional shifts West and East are seen. 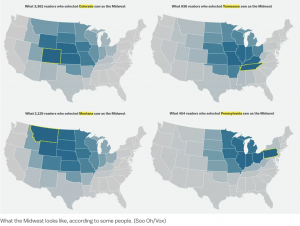 Finally, 2014 SurveyMonkey results from 2,778 respondents created the data presented in the map below. Almost half of respondents, 1,357 of them, identified “a lot” or “some” as a Midwesterner, and then identified which states they believed were in the Midwest. 81 percent of respondents identified Illinois as Midwestern. Iowa and Indiana also got more than 70 percent, which could be attributed to their larger populations, as people from Midwestern states seemed to define the Midwest by their state and states bordering it. 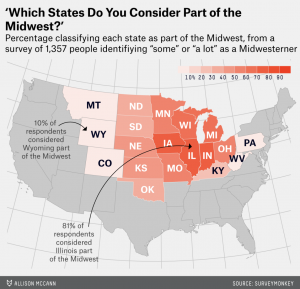 While there is no clear answer as to the specific geographic boundaries of the Midwestern United States, it is clear that people who consider themselves Midwesterners have strong opinions on the topic.