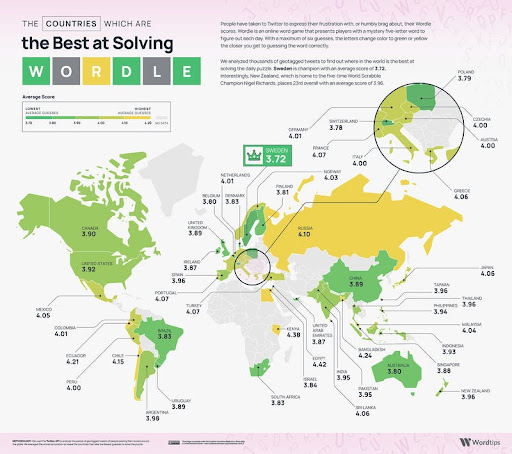 This week’s lighthearted map from Wordtips gives insight on which countries are best performing when it comes to the newest puzzle sensation, Wordle. The game exploded in popularity at the beginning of 2022. In November 2021 there were only 90 active players, however by late January, those numbers topped 2 million daily solvers. This once-a-day game invites players to guess a five letter word in only six tries. After each attempt the game will tell you whether any of the letters you guessed are in the unknown word and if they are in the correct placement. 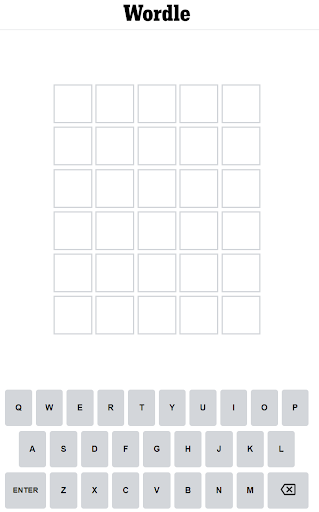 Wordle’s quick rise to fame did not go unnoticed. The New York Times purchased Wordle in January from the original developer for a price in the “low seven figures.” Interestingly enough, the creator of the game Josh Wardle designed the word game during the COVID-19 lockdowns as a gift for his quick-witted partner. The game likely went viral thanks to its unprecedented social media presence. Players can share the results of their puzzle score across media platforms and messaging groups. According to psychologist Lee Chambers, “The game stimulates both the language and logic processing areas of the brain, and it leads to the release of dopamine, a chemical that causes people to seek out a positive experience again.”

In fact, the map above was created using data from geotagged tweets of people’s daily puzzle results. Low scores are more desirable and mean the player was able to guess the word in fewer attempts. Sweden takes first place in this particular score analysis, followed by Poland. The map makes a comical note of New Zealand’s 23rd place position since this country is home to five-time world Scrabble Champion Nigel Richards. 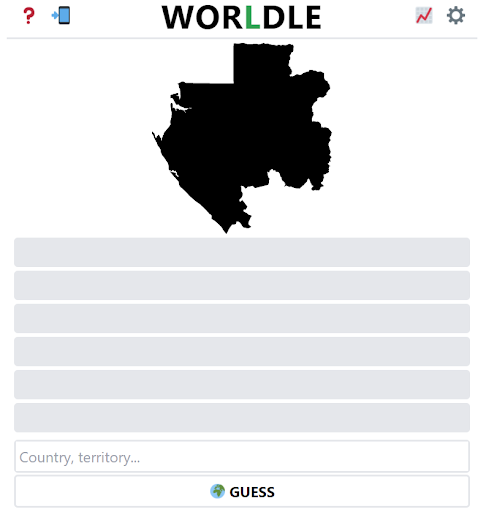 While Wordle is very entertaining, it would be a disservice if we did not share the game’s recent spin off to our fellow geographers. Introducing Worldle, the geographical version of Wordle that transcends languages, vowels and consonants by showing only a country’s outline to guess the name. Whether you prefer Wordle or Worldle, we here at the American Geographical Society wish you happy solving and lucky guesses!