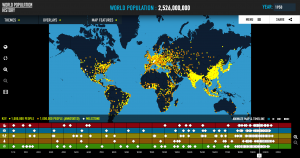 The first version of this map was created over forty years ago, and the basis was the same—to create a visualization of the human race wherein one dot is equivalent to one million people. The representation begins in 1 C.E. and continues using projections through the year 2050. Since the seventies, Population Connection (formerly known as Zero Population Growth) has continued to update, each new addition becoming more accurate and technologically advanced. The World Population History map can be viewed in classrooms, museums, and boardrooms around the world, with the current version (circa 2015) being translated into six languages. The map in its original form was published as a video—a public service announcement campaigning for a decline in population growth. Popular slogans at the time consisted of “the pill in time saves nine!” and “this line is too long. Join ZPG!” My personal favorite is: “Stop Heir Pollution.”

Today, the World Population History Map remains a valued classroom resource. Now online and interactive, the map interface allows users to manipulate the scale and timeline. To add context to the dots and years, the map focuses on five “areas of human existence.” These themes (People and Society, Science and Technology, Food and Agriculture, Health, and Environment) correspond with milestones sprinkled and 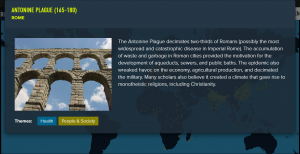 throughout the map, spanning from the Han Dynasty to the age of Information. These historical references add an additional layer of intrigue to the map, often overlapping with significant changes in a region’s population, whether it be what the Hoover Dam brought to the Southwestern United States in 1935, or the Antonine Plague took from Rome in 165.

Overlays are an additional way to explore the map, offering perspectives on a region’s fertility rates, land use, urbanization, fossil fuels, or life expectancy. The overlays vary in effectivity, depending heavily on historical records—for example, not much data exists on fertility or life expectancy pre-1950. Even the older population data relies on analysis and what our current understanding of the past is. While we know there were census taken in the Han Dynasty and Ancient Rome, not much of it still exists. In many parts of the world, little to no record exists at all. What does exist may surprise some of the less historically inclined; for example the first million-person dot in America appears at 1 C.E. in the Mojave National Preserve, where 1/3 of American Indians were estimated to live pre-colonization.

The World Population History Map remains an effective educational tool. For teachers interested in sharing it within the classroom, Population Connection has crafted six lessons that correspond with different features of the map. The lessons are designed to align with national and state standards (including some AP courses) and touch on a myriad of geographic topics including environmentalism, geographic information systems, and global events. The overarching purpose of the map remains the value in protecting the planet in order to create and sustain an enjoyable future for all.