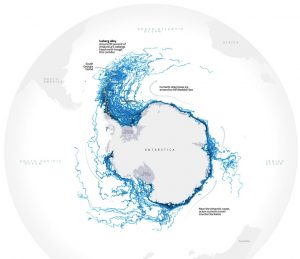 Map from Reuters shows the routes of icebergs after breaking away from Antarctica.

Reuters recently published a map, accompanied by graphics, of the travel routes of Antarctica’s  icebergs. Detailed in blue are the paths that icebergs follow after breaking away from the continent.

One iceberg, in this case, is particularly of interest. Highlighted in yellow is the route of the world’s largest iceberg, A68a. In July 2017, the iceberg broke away from the Antarctic Peninsula, and began drifting into the open ocean. For two years, A68a slowly floated in the ocean until it met the Antarctic Circumpolar Current, an ocean current that circles around Antarctica. From there, the mass of ice began at a faster pace through “iceberg alley,” a common route taken by icebergs once they break off the peninsula.

Typically, once icebergs are in the open ocean, the turbulence of waves batter the berg until it dismembers into much smaller icebergs. That was not the case with A68a. Now, it is on a collision course with British overseas territory, South Georgia Island. In the days ahead, the iceberg could collide with the shore of South Georgia. “It is really, really close, less than 50 kilometers away,” says biological oceanographer, Geraint Tarling. Tarling told Reuters that at this distance, a collision  is almost inevitable. Though there are no permanent human residents of South Georgia, the iceberg does pose an obstacle for some two million penguins. The massive size of A68a could block the penguins from returning to shore and feeding their young; the next generation of penguins.

Check out more on the world’s largest iceberg by going to: https://graphics.reuters.com/CLIMATE-CHANGE/ICEBERG/yzdvxjrbzvx/index.html