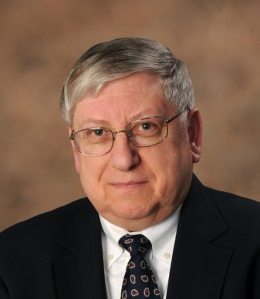 American Geographical Society Councilor Dr. Lawson Brigham works at the frontline of policy and research regarding polar issues, focusing mainly on the Arctic. He is currently a Distinguished Professor of Geography & Arctic Policy at the University of Alaska Fairbanks, a Fellow at the U.S. Coast Guard Academy’s Center for Arctic Studies and Policy, and a Senior Fellow at the Institute of the North in Anchorage.

Lawson grew up in Shelter Island, New York on the eastern end of Long Island, and started his career in the Coast Guard after graduating from the U.S. Coast Guard Academy in 1970. As a Coast Guard officer, Lawson sailed to Greenland on a polar icebreaker and also was commanding officer of a Great Lakes icebreaker. He worked in polar operations, and traveled through Finland and the Soviet Union on icebreakers, which got him more involved in Arctic issues. Famously, Lawson was the captain of the icebreaker Polar Sea, which he sailed to the North Pole and to the Ross Ice Shelf, Antarctica becoming the first ship to reach the ends of the global ocean in 1994, and earned him a signature on the AGS Flier’s and Explorer’s Explorers Globe in 2008. Lawson received his PhD in geography & polar oceanography from the Scott Polar Research Institute of the University of Cambridge in 2000, focusing on sea ice and climate change in the Russian Arctic. 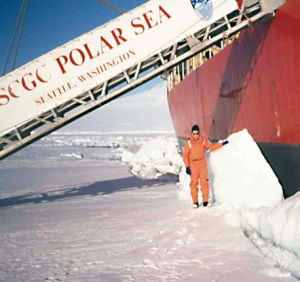 His most recent work has included being a part of a U.S. working group that traveled to Shanghai in late May 2015 for the first Sino-US Arctic policy workshop regarding the Arctic, with discussions focusing on U.S. Chairmanship of the Arctic Council and broad Chinese interest in the Arctic region. This workshop was only the first of a planned annual venue to support China-U.S. Arctic collaboration. Lawson has studied and written extensively about U.S. and Russian collaboration regarding the Arctic, and plans to further address the importance of U.S.-Sino Arctic commitments in his writing and research.

Lawson also traveled in 2014-15 to the International Maritime Organization (IMO) in London as part of the U.S. Delegation for meetings during the negotiation of the Polar Code, a set of mandatory rules for ships operating in both polar regions, which will come into force on January 1, 2017. Lawson began work on the Polar Code in 1993, so he and other marine experts have been involved for the last 22 years with this international initiative. In a policy brief for the Arctic Climate Change Economy and Society (ACCES) Project, involving ten European countries, he described the Polar Code as “a historic milestone for marine safety and the protection of Arctic people and the marine environment in polar waters.” However, he also highlighted the need for further efforts to tackle issues that are still unaddressed by this code, such as black carbon, heavy fuel oil use in the Arctic and the potential designation of marine protected areas

Lawson was in 2004-09 Vice Chair of a working group of the Arctic Council called Protection of the Arctic Marine Environment (PAME). He was previously chair of the Council’s Arctic Marine Shipping Assessment, which was a comprehensive study involving more than 200 experts. Released in 2009 this pioneering study provided a framework for the Arctic states to address the impacts of shipping and marine operations on Arctic people and the Arctic marine environment. During his time chairing AMSA, he was the Deputy Director of the U.S. Arctic Research Commission.

When asked about his views on the future of the Arctic region, Lawson expressed that he was optimistic that cooperation between the Arctic nations will continue to keep the region a peaceful and secure place. He underscored, however, the importance of maintaining active involvement from all states to ensure that this region can be utilized and protected sustainably, particularly taking into account the livelihood of the communities that live in the Arctic. In an article for the Fletcher Forum of World Affairs he described his predictions for the Arctic in 2050, writing that the “Arctic states will face a more environmentally-challenged, warming globe, and less stable world to the south,” which will require a closely linked maritime Arctic to ensure peaceful co-existence.

Lawson describes himself as a mariner, stating that he was “connected to the ocean from day one.” His crucial policy, security, and scientific work in the Arctic and Antarctic regions throughout his career shows an inspiring commitment to solving global issues, and has greatly enhanced the field of Geography, as well as the well-being of our planet. The American Geographical Society is extremely proud of all of Lawson’s achievements, and we are sure he will continue to make strides towards stability and sustainability in the polar regions in the years to come.