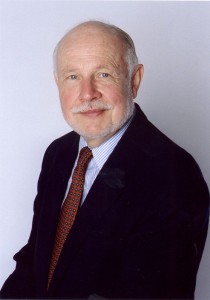 American Geographical Society Councilor John Noble Wilford is a two-time Pulitzer Prize-winning science journalist. He is probably most famous for being the only by-line on the 1969 New York Times front page headline “Men Walk on Moon.” While this alone would be considered an achievement of a lifetime, Mr. Wilford’s fascinating career has been so much more.

Mr. Wilford’s interest in maps began during World War II, with the attack on Pearl Harbor. He was in the third grade, and remembers sitting around the radio with his parents listening to the live news updates and wondering where this country called Japan was. His parents got out an atlas, and helped him find the island nation. In addition to calming his fears (Japan was a far way off from the town where he lived in Tennessee), it also sparked his interest in geography. Later on in his life, he was given the opportunity to cover a story on the remapping of the Grand Canyon using aerial photography and brand new laser technology. He spent over a week accompanying the team as they flew in and out of the canyon in a helicopter and made precise measurements. In the evenings he would listen to members of the exhibition speak about how this was different than the way the world had been mapped up until only thirty years prior.

Mr. Wilford came back to New York City after the Grand Canyon assignment, and could not stop thinking about what he had heard on those nights in Arizona. He began to wonder, how was the world mapped? So, he started spending a great deal of time at the New York Public Library’s Map Division, reading as many books as he co 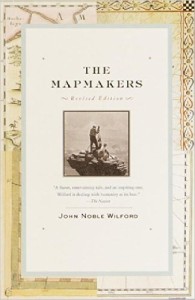 uld on the subject. During this time, he says he discovered that “no one had ever, in recent times, written a book about how the world was mapped… there had been a lot of books and collections of maps, but these were more appreciation for the maps themselves, not stories about how it was done.” This lead Mr. Wilford to write his book The Mapmakers (of which The Folio Society of London will be releasing a deluxe edition in the next year). It was a great time to be writing such a book, in the midst of emerging technologies. We were just starting to map the ocean floor and understand plate tectonics. We were mapping Antarctica, and discovering that underneath the ice, there were, in fact, two landmasses. Not only did he tell the story of how maps were made, but also who made them.

Mr. Wilford began his career in journalism in 1956 with the Wall Street Journal, followed by several years as a science writer for Time magazine. He started at the New York Times in 1965. He officially retired in 2008, but they keep a desk for him in the office. He continues to contribute stories from time to time, such as his most recent front page article about the discovery of Homo naledi, a previously unknown human species, in the caves of South Africa. The New York Times and the American Geographical Society have always had a special relationship. In 1925, associate editor (and later editor-in-chief) of the New York Times, John Huston Finley, became the president of AGS. During this time, his most memorable contribution to the society was the Fliers’ and Explorers’ globe. Following his tradition, the globe continues to be signed by the many of the world’s premier, record-setting explorers, not least including Mr. Wilford’s friend, Neil Armstrong.

d had met Armstrong a couple times as a reporter prior to the Apollo mission, and spent the year leading up to the launch writing the material for a book about the task of reaching the Moon. Therefore, Armstrong was astonished when he returned to Earth and mere days later Mr. Wilford published what was essentially an “instant book” on his endeavors. Mr. Wilford got to know Armstrong much better after that, and says that he “admired him very much, because he sort of withdrew from the limelight… he was a modest person, but very intelligent.” Not only did Mr. Wilford write the page one story about Armstrong’s landing on the Moon, but a few years ago he also wrote his obituary. It, too, was on the front page of the New York Times.

Mr. Wilford has always had a deep interest in space. He spent so much time at the Jet Propulsion Laboratory in Pasadena, California that he speaks of it as his second home. In addition to the Moon landing, he also covered the first space shuttle missions. He covered the voyager flyby of Uranus, and our first landings on Mars. However, after reporting on the Challenger disaster of 1986, he began to pull away from space. He is still understandably called upon as an expert to cover the subject, and he doesn’t mind writing pieces such as the 40th anniversary of Apollo 11. He says he enjoys reflecting on what it all means.

“As I get older, I love old things,” said Mr. Wilford, who just turned 82 last week on October 4th. Much of what he presently writes about concerns paleontology, dinosaurs, and human evolution, such as the H. naledi cover story last month. However, as he was quick to point out to me, he shares his birthday with the launch of the first Sputnik satellite into space. Some passions are hard to shake.  – Jesse Miller