Today, we honor the life of John Glenn, previously recognized by the American Geographical Society as a hero of exploration. In 1962, when he returned from the first earth orbits by an American Astronaut, he was accorded our highest exploration honor. He was invited to sign the AGS Fliers and Explorers Globe. To sign this unique globe is the highest exploration honor, not just at AGS but everywhere. Honors gain their prestige partly from the organizations that award them but even more from those who receive and accept. Don Walsh who, with Jacques Piccard descended to the deepest ocean bottom in 1960, notes that it is the only object or place on earth touched by almost every major explorer and aviator of the 20th Century. It is one of the most valuable globes on earth due to the 82 signatures (and in many cases the marked routes) of luminaries such as Charles Lindberg, Amelia Earhart, Sir Edmund Hillary, Matthew Hensen, Richard Byrd, Roald Amundsen, Wiley Post, Neil Armstrong, Don Walsh, Valentina Tereshkova, Alexei Leonov, and others too numerous to list here. For a more complete history and list of signers visit the AGS website here. 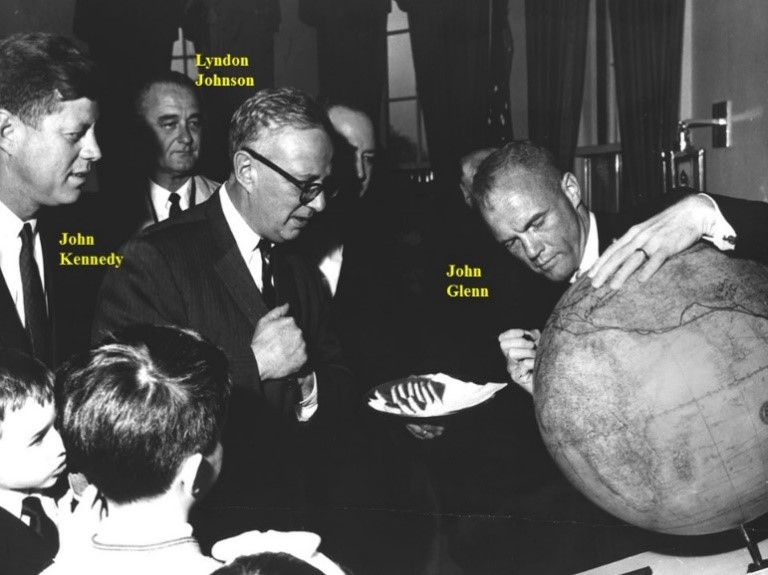 Figure 1. Astronaut John Glenn signs the AGS Fliers & Explorers Globe in the presence of President John F. Kennedy, Vice-President Lyndon B. Johnson, AGS Director Charles B. Hitchcock, and two of Ethel and Robert Kennedy’s sons (probably Michael and David, who would have been 4 and 7 years old at the time).

The globe has been a prized possession of the society since 1929.  Many signatures were obtained even earlier by the donor John Finley, president of the AGS and editor-in-chief of the New York Times.  The globe-signing tradition was actively pursued by the society from the 1920’s onward to honor aviators who set world records and explorers who reached new places. Ocean exploration and depth records were honored as well, for example, when William Beebe set the depth record in 1934 and Louise Boyd explored the ocean floor around Greenland.

The Society defines and restricts each new signer to the following criteria:  “Someone who performs an innovative, record-setting, or daring feat of discovery or transport that transforms human perceptions of geographical space, or someone who goes to a previously unvisited or unappreciated place and makes a discovery that contributes fundamentally to geographical science.”

John Glenn’s august ceremony was lightened only by the odd fact that a butler in shadows appears to be offering cookies in the midst of it all.  Some viewers have suggested a tray of pens.  With magnification, however, they look delicious, and someone seems to have accepted, since only 11 are left on the plate.