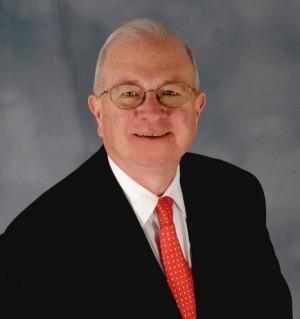 In 1978 John Gould was successful in the litigation to move the American Geographical Society Library to the University of Wisconsin in Milwaukee.  The victory came after Gould, a thirty-four year old lawyer with Webster & Sheffield, emphasized the legal justification for the move by pounding his right fist down on an antique table in the Blue Room of New York’s City Hall.

His dramatic emphasis both broke the antique table and caught the attention of New York City’s then mayor, Edward Koch.  The AGS Library was a unique and valuable resource for geographic research, and with no one offering to take the collection in its entirety in New York, the only way to preserve the full value of the Library was to transfer it to Milwaukee.  Kock became convinced, and then helped Gould persuade the court to authorize the transfer.

Not long after his strong performance at City Hall, Gould was invited to lunch by AGS President Richard H. Nolte, Vice President Alexander Melamid and Councilor Walter Sullivan. The men surprised Gould by inviting him to join the AGS Council.

“Dick Nolte told me I had become a zealot for geographic literacy and that I had no choice but to join the Council,” Gould recalls.

After formally joining the council in 1978, Gould was elected President in 1980.  He served as AGS President until 1996, and has since then served as the Society’s Chairman.  This puts Gould’s years of service on the Council at almost forty years, a record longer than anyone else currently serving AGS.

Despite the passing of almost four decades, Gould states that, “the mission has stayed the same: to enhance geographic literacy and promote the use of geographic information and analysis in business, government, science, and education.”

Along the way though, there have been challenges.  Gould recalls the first Gulf War in 1990, and its negative effects on AGS’ travel program.  He points to the stock market crashes  of both 1987 and 2008 as causing significant declines in annual revenue available from the Society’s endowment funds.  In addition to this, Gould says that, “corporate philanthropy has changed.”  He explains that such philanthropy is now more “cause driven” and connected to corporate business purpose, thus making it more difficult for AGS to fit into this niche.

Gould reflects that during his time with AGS there have been moments when it has, “been a challenge to continue, but we have persevered.”

With forty years of moments, it can, understandably, be difficult to pick out just a few favorites.  Among Gould’s highlights: the highly successful 2014 and 2015 ‘Geography 2050’ Symposia; the victory with the library transfer; the Globe signings by great explorers of the 20th century, including the two signing events in which Neil Armstrong actively participated; and the annual meetings of the Council held at interesting venues, such as the Library of Congress, the State Department, the CIA, West Point, and Fort Leavenworth, with the latter meeting being particularly exciting due to the lively  participation of General David Petraeus.

When asked to identify his most significant decisions for AGS in the past decade, Gould cites: his participation with Jerry Dobson in the hiring of John Konarski as the current Executive Director; and his participation with the full Council in deciding to approve Chris Tucker’s recommendation to undertake the ‘Geography 2050’ Symposia.

Gould says his work with AGS has always been, “very enjoyable.”  While reluctant to praise particular Councilors for fear of unintentionally failing to recognize someone important, Gould says working with the Presidents of AGS over the years has been especially rewarding.

“I recall very well the pleasure of working with Dick Nolte, Donald Lloyd Jones, Bill Doyle, and Jerry Dobson.”  Gould also says that he “feels compelled to stress the role Jerry Dobson has played in the past decade in raising funds needed for the Society’s survival and in reaching out through Lee Schwartz and others to successfully attract our new generation of AGS Councilors.”

Although Gould is stepping down from his position as Chairman, he is not going very far.  Gould will continue to serve as a Councilor for AGS.  He says he is, “delighted” to hand over his position to Chris Tucker, and is confident that with a leadership team like Tucker (AGS Chairman Elect) and Dr. Marie Price (AGS President Elect) AGS is, “poised for great success.”