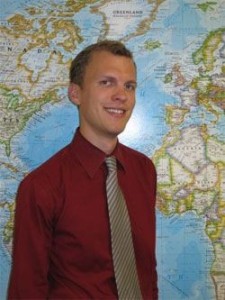 Dr. Wesley Reisser, a National Councillor for AGS, was recently announced as the winner of the United Nations Association Tex Harris Award for Human Rights and Diplomacy. The award is being presented to Dr. Reisser for his work on LGBT rights at the United Nations and on his analytical work on voting patterns at the UN regarding human rights issues more broadly.  Dr. Reisser has spent the past five years working at the U.S. Department of State on human rights and humanitarian issues at the UN, and led the process within the U.S. government on creating a policy to promote the human rights of lesbian, gay, bisexual, and transgender persons at the UN, which has led to several major strides including the adoption of the first-ever resolutions on LGBT rights at the UN Human Rights Council in Geneva and the holding of the first UN Security Council briefing on the subject earlier this year, focusing on ISIL’s targeting of the gay community in ISIL controlled areas of Iraq and Syria. Dr. Reisser is very excited to receive this award and to use it to further strengthen ties between the U.S. government and civil society organizations in the pursuit of human rights globally. His work on UN voting has also had a strong geographic angle, as he has worked to better model and predict UN voting patterns through the use of geopolitical analysis and modeling. Dr. Reisser will receive the award, along with two other human rights award winners, in a ceremony on Capitol Hill on December 10, Human Rights Day which is the anniversary of the UN’s adoption of the Universal Declaration of Human Rights.