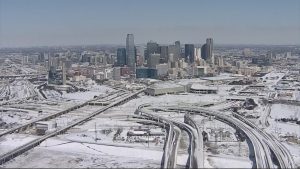 The February 2021 disaster in Texas was predictable, and in fact has been anticipated for decades. The cause lies at the geographical intersection of politics, economics, and engineering.

Once while working at Oak Ridge National Laboratory (ORNL) in the 1970s, I casually mentioned “the national transmission grid” and got slammed by a chorus of electrical engineers. “There is NO NATIONAL GRID,” they barked and then enthusiastically shared their wisdom with me. In fact, there are three separate grids: one in the East, one in the West, and one in Texas. It’s not just a matter of institutional ownership. They are physically separated and out of phase so that whole lines would melt if suddenly connected.

The engineering solution is to convert electricity from AC to DC on one side and back to AC on the other. That’s called a “DC emergency tie.” Back then there was only one—the David A. Hamil DC Tie* in western Nebraska, named after the longtime, visionary administrator of the Rural Electrification Administration (REA) that brought electricity to rural America including my own home in North Georgia. Now there are six, but that’s still quite restrictive. Within each grid, utility companies can borrow energy from one another whenever one runs short and others have plenty. Across those boundaries, even neighboring utilities can’t help one another.

Way back when, federal regulatory agencies required each utility to build a reserve consisting or 20% more generation and transmission capacity than it actually needed. If that were still the case, Texas would have plenty to weather this storm. But idle capacity costs a lot of money. Eventually, political pressures forced regulators to yield, and the compromise was to allow multiple utilities to share the same reserve capacity. What happens if they all need it at the same time? That still works OK most of the time for large grids where risks are diverse (ie. the same storm rarely devastates an entire region). It does not work well for a one-state grid, like Texas, where individual disasters sometimes cover the whole state. That’s where we are now. So, the governor blames ERCOT, and ERCOT blames politicians, and all of them vow to do better next time, but not much will happen because “idle capacity costs a lot of money.”

The fireball you saw erupt from a transformer and surge from pole to pole is a different matter.  That’s a load management problem that occurs when demand and supply suddenly get out of kilter. An ORNL colleague explained power grid management to me this way: Every part of an electrical grid is integrally connected to every other part. Imagine building a model with rubber bands connecting pole to pole from every generator to every consumer and every station to every subsubstation. Tug one or several of those rubber bands and release abruptly with a twang. Now, watch the vibration ripple through the whole grid over several cycles. That’s what happens every time someone flips a switch at home or in a factory. The system is built to handle thousands of switches in normal patterns of use, but it goes haywire if everybody switches at the same time or if lightning strikes a line or if a generator goes out or if ice brings down whole sections of a grid. It’s a wonder the grid managers are able to keep the loads as stable as they do.

*In those days all professional staff wore neckties when speaking to a group or entertaining a visitor, especially visitors from Washington, DC from whence most of our funding originated. Just in case someone surprised us, we kept an old necktie in reserve, thumbtacked to a bulletin board and labeled, “David A. Hamil Emergency Tie.”