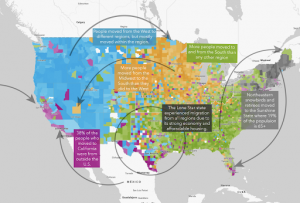 This StoryMap, Where are people moving? by Jennifer Bell tracks the movement of people to different regions in America during the year of 2020. Data was retrieved from the American Community Survey to visualize the areas with the most movement.

Looking at this map provides a more comprehensive understanding as to why some people migrate. For example, snowbirds and retirees from the Northeast moved to Florida where 19% of the population are aged 65 and older.

These maps also showcase where the biggest hotspots of immigrants are located. A large purple cluster can be seen along the U.S./Mexico border in south Texas. Texas received the most migration from all regions due to its size, strong economy, and housing opportunities. In California, 38% of people who moved there last year were from outside of the U.S. 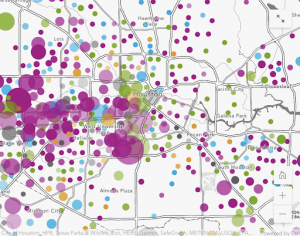 The story then focuses on cities specifically, looking into where people in cities have moved from. In Houston, Texas, the map (left) depicts where the populations of new Americans are settling. Users can search specific zip codes and city names to see more detailed explanations of the movement in such areas.

Due to COVID-19 and the new work-from-home culture, young people have been moving at high rates. This has many impacts on the areas they are moving to and their political geography. 2020 Census data shows that more young people are moving to southern and western states. This could affect redistricting maps, potentially turning once solidly-conservative states more liberal. Examples of the effects of this include Texas, Georgia, and Arizona.