In 2021, the chocolate industry generated almost 1 trillion USD revenue across the world. 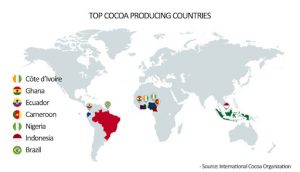 Chocolate is one of the most popular food products around the world and is made from tropical cacao tree seeds native to Central and South America. Historians have revealed that chocolate has a long standing history, dating back about 2,000 years. However, it wasn’t until Europeans colonized the Americas that chocolate consumption spread worldwide. During the 17th century, chocolate was a popular drink among elite groups and didn’t become affordable to the masses until the 20th century. Today, chocolate is a billion dollar industry, raking in over 46 billion USD in 2021, and is projected to reach 67 billion USD within the decade.

Although chocolate’s history began in the Americas, currently the lion’s share of cocoa is sourced from the African continent. Côte d’Ivoire and Ghana together supply half of the world’s cocoa beans, while much of the rest is collected from Indonesia, Nigeria, Cameroon, Brazil and Ecuador. However a huge gap exists in which nations cocoa is extracted from versus where the finished chocolate product is consumed. Europe consumes around 40 perfect of the world’s cocoa – 85 percent of which is imported from West Africa alone.

Cocoa production is the source of income and livelihood for 40 – 50 million farmers. However, cocoa production is laborious and requires meticulous effort while earnings are relatively negligible. The chocolate industry continues to enjoy a blooming market while cocoa farmers are under-compensated and struggle to meet their basic needs. Furthermore, child labor and slavery has become commonplace in West Africa’s cocoa farms.

Yet, there is some hope. Researchers have introduced alternative cocoa farming techniques with the potential of increased productivity while reducing intense labor. In addition, scientists have mapped the cocoa genome which is expected to contribute to a more efficient production model and increased income for cocoa farmers.